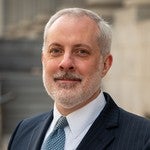 Todd M. Wesche is the Managing Member and founder of Vetus Legal LLC. He helps veterans, and their dependents and survivors, obtain the U.S. Department of Veterans Affairs (VA) benefits they deserve. This has been his passion since 2004, building on his experience as an active-duty member of the U.S. Air Force.

He has had a distinguished and unparalleled career doing so. It started with Todd serving for four years as a Law Clerk and then the Senior Law Clerk to the Honorable Bruce E. Kasold at the U.S. Court of Appeals for Veterans Claims (CAVC). He then left to represent his fellow servicemembers before the CAVC and at the VA. He has represented hundreds of veterans and advised on thousands of claims.

His vast experience also helps others who also serve veterans. Since January 2013, Todd has been a member of Board of Directors of the National Organization of Veterans' Advocates (NOVA), a nation-wide organization that trains attorneys and advocates to improve their practice before the VA and the CAVC. He has presented at NOVA's training seminars on many occasions. Additionally, he has advised the CAVC judges on possible changes to its own rules as a member of its Rules Advisory Committee. He currently serves on the CAVC's Committee on Admission and Practice, which investigates alleged ethics violations and makes recommendations to the Court.

Thank you for contacting us. We will get back to you shortly.

Please complete all required fields below.

We Are Here for You

At Vetus Legal LLC, we focus on VA Disability Compensation Claims at the Regional Office, Board of Veterans' Appeals, and the U.S. Court of Appeals for Veterans Claims. We are here for you and to help you navigate this complicated and overwhelming legal system.

We are committed to helping you maximize your VA compensation benefits.

We'll gladly discuss your case with you.

To provide cost-effective and efficient services, we meet by phone.